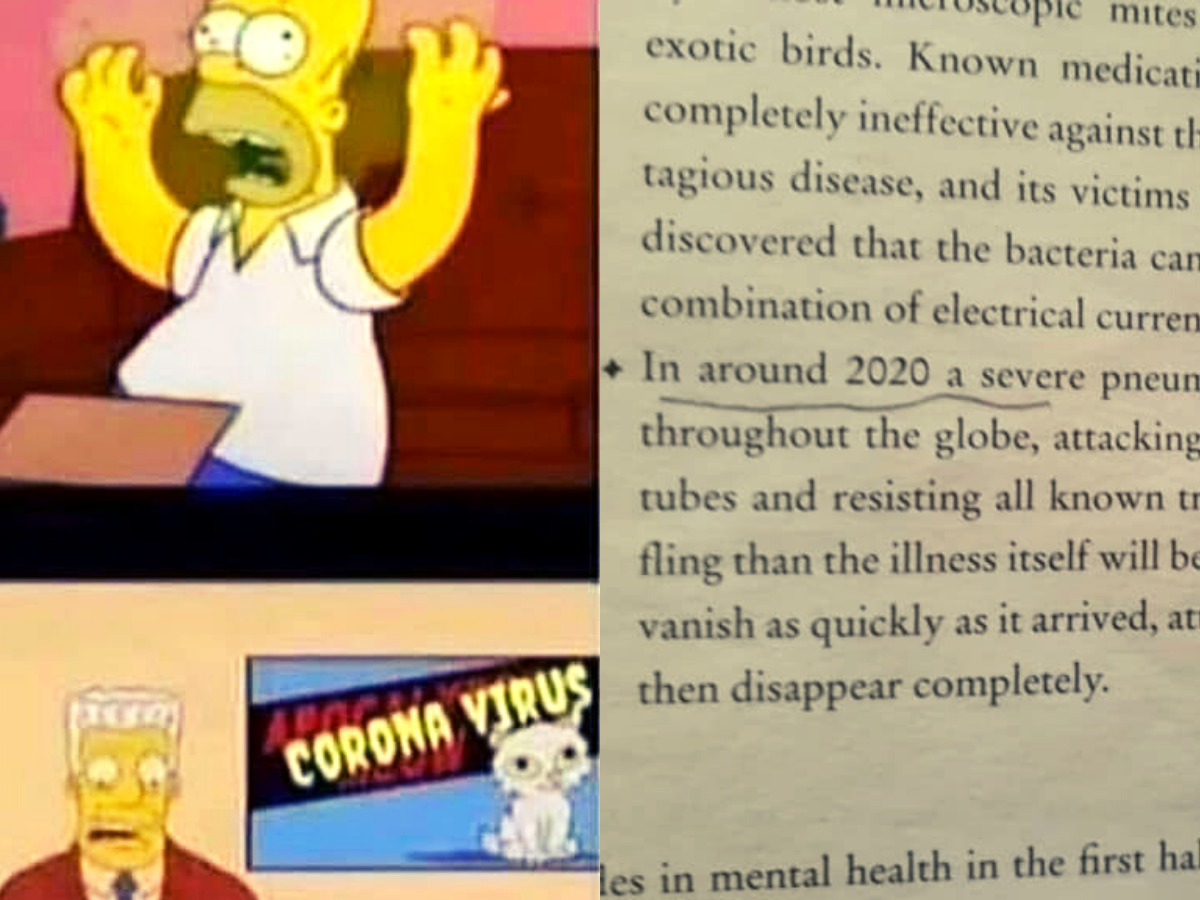 Coronavirus has already claimed around 3,132 lives and infected more than 92,000 people globally. While the world continues to grapple with the infectious disease, more and more cities are reporting their first case of COVID-19. On Monday, two fresh cases of the disease were reported in the Delhi and Hyderabad and the National Capital has been put on alert for coronavirus.

Amidst widespread confusion and panic over the viral infection, several mind boggling conspiracy theories have been doing rounds on social media platforms. From books, movies to the prophetic writers of ‘Simpsons, here is the low down of creepily accurate predictions of the respiratory illness.

There is no denying that the longest-running animated comedy series is the undisputable king of predicting major world events. Almost 16 years ago, in an episode titled ‘Bart to the Future’, it was shown that Donald Trump will become the president of the United States of America. This time a viral collection of images, apparently taken from the 1993 episode of Simpsons are going viral on social media. In the Simpsons, the viral flu is seen to be originating from Japan and not China as the workers ship the Osaka Flu to Springfield. Don’t believe us Here, take a look at the snapshot:

2. A novel that talked about ‘Wuhan virus’


In a 1981 crime-thriller novel, titled ‘The Eyes of The Darkness’, suspense author Dean Koontz wrote about a virus called Wuhan-400 which was created as a bio-weapon in a laboratory. Furthermore, the virus had the capability to wipe out an entire city or country. The bizarre coincidence sent waves of shocks amongst people across the globe as they began to draw parallels between the fictional and real scenarios. People were quick to share the excerpt from the book online, which seemingly predicted coronavirus almost 40 years ago. 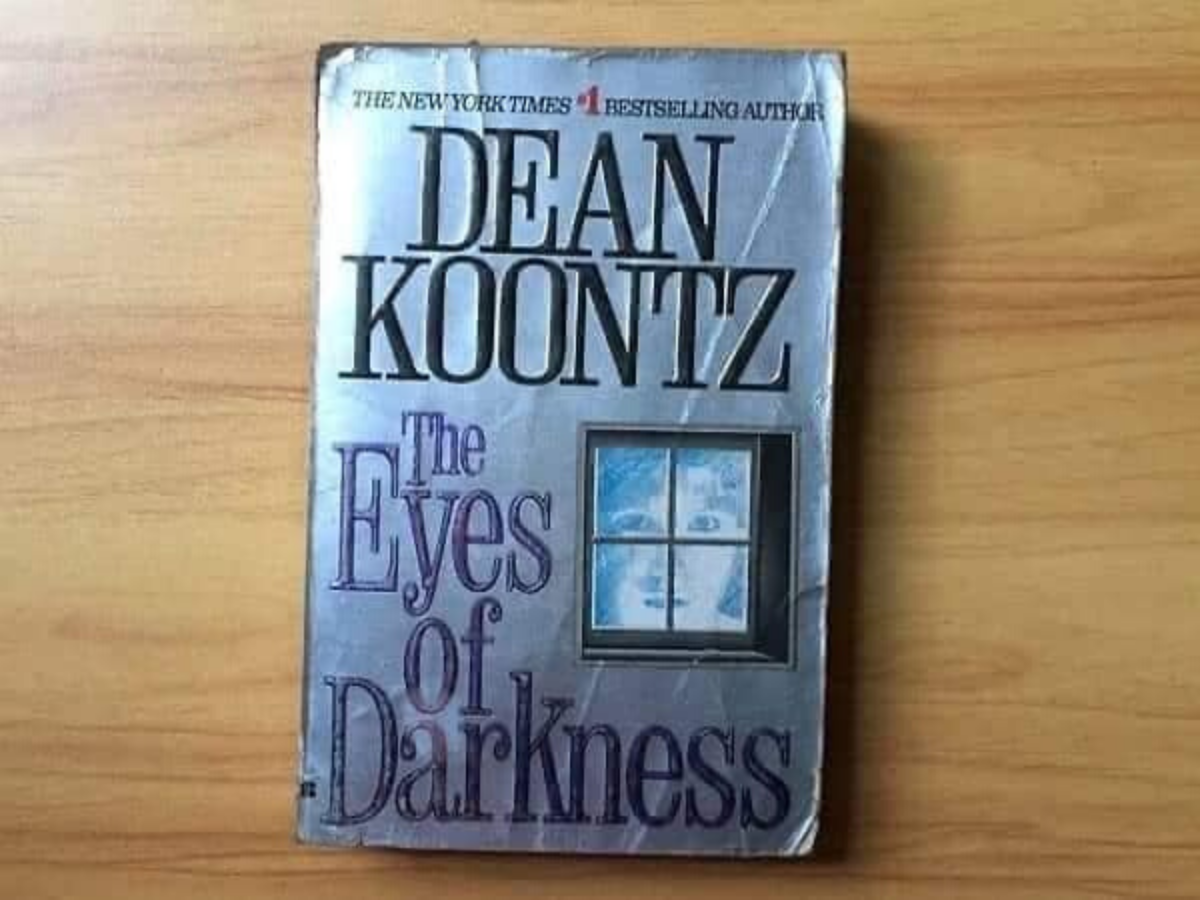 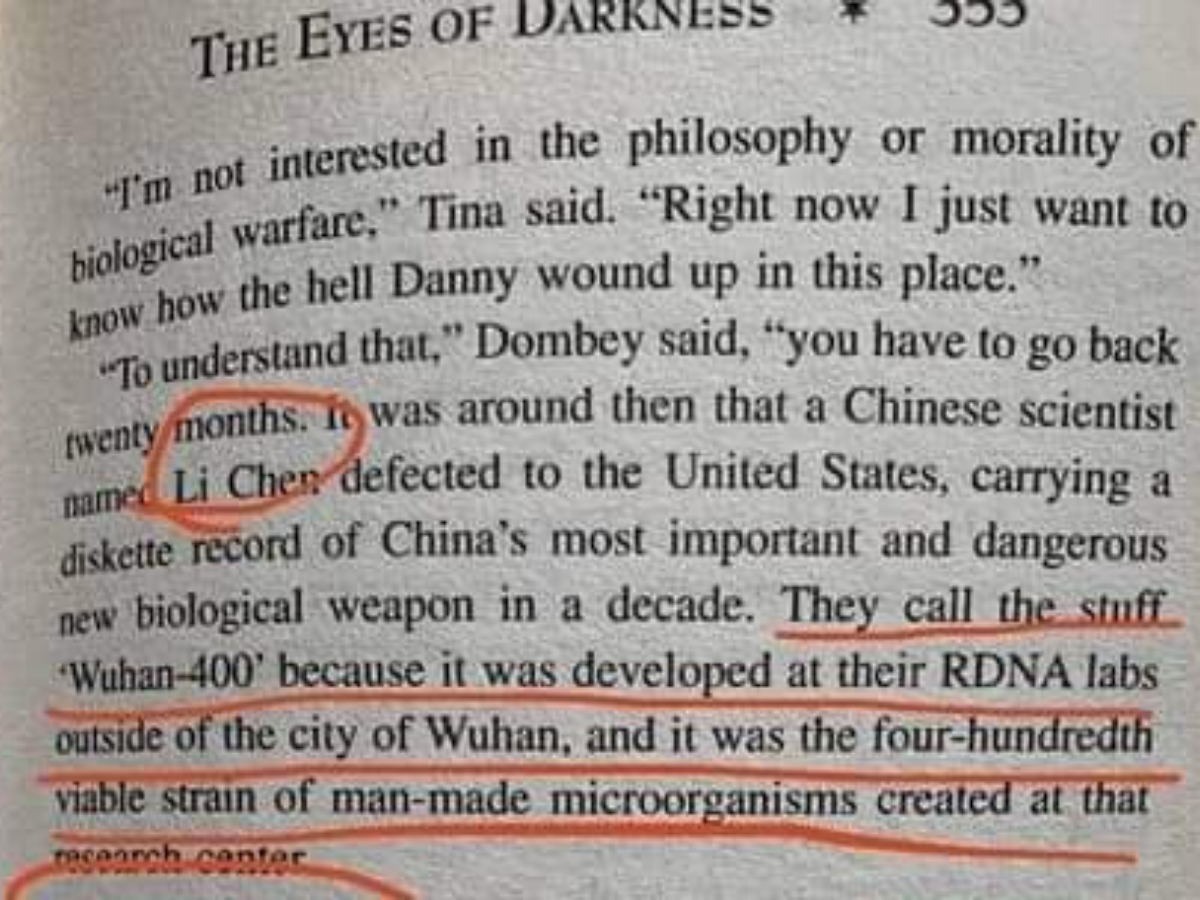 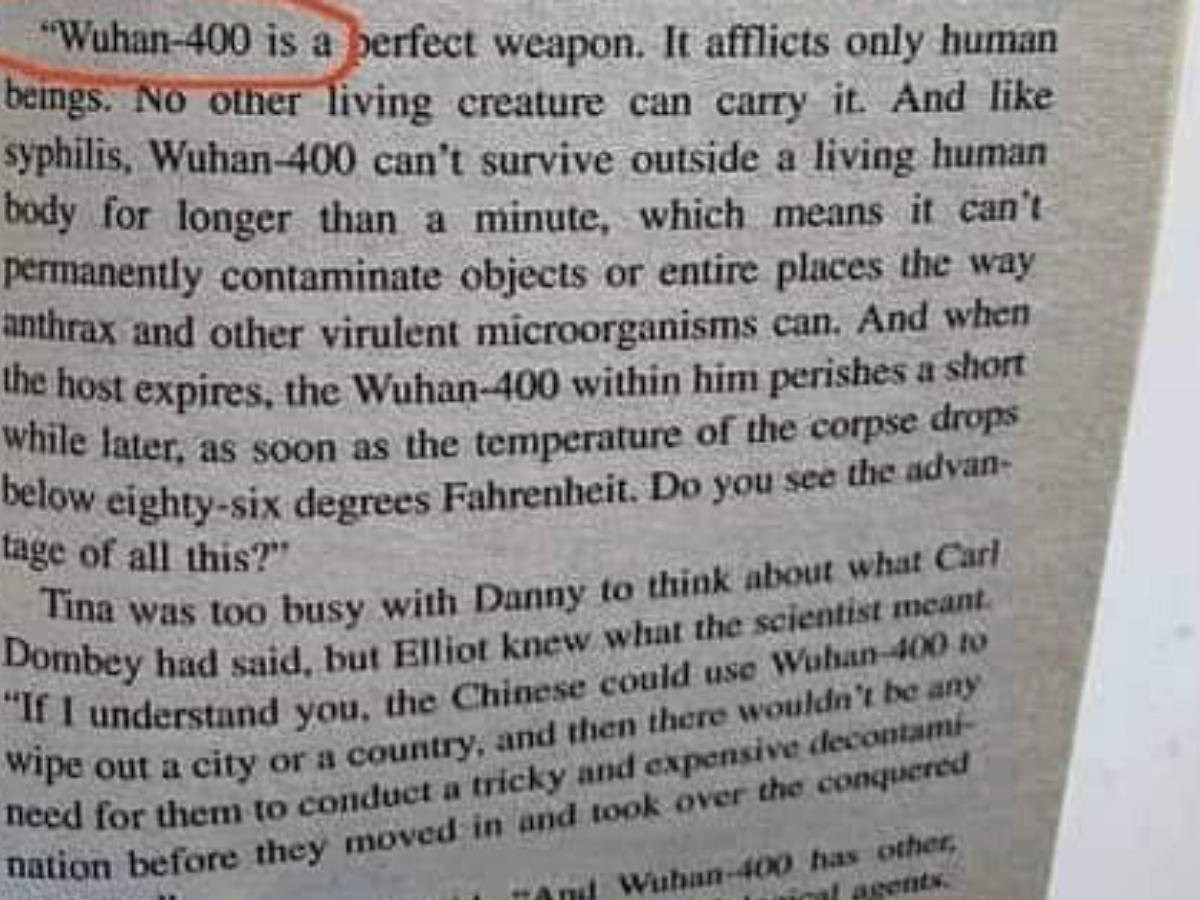 
In case you aren’t already creeped out, there is a 2011 movie, starring Gwyneth Paltrow which had an eerily similar plot to coronavirus outbreak. This Steven Soderbergh movie is about a virus outbreak which started in Hong Kong. The fictional virus–which is known as MEV- 1 in the movie–is shown to kill 20 per cent of people affected with it. This 2011 film about the global health scare seems all too familiar in the current scenario, as it shows the impact of misinformation and myths that can be easily spread through technology.


There is yet another book that many Twitter users are claiming predicted the highly infectious coronavirus in the year 2008. Yes, you read that right. Author Sylvia Browne, who claimed to be a medium with psychic abilities, wrote a book titled “End of Days: Predictions and Prophecies about the End of the World.” 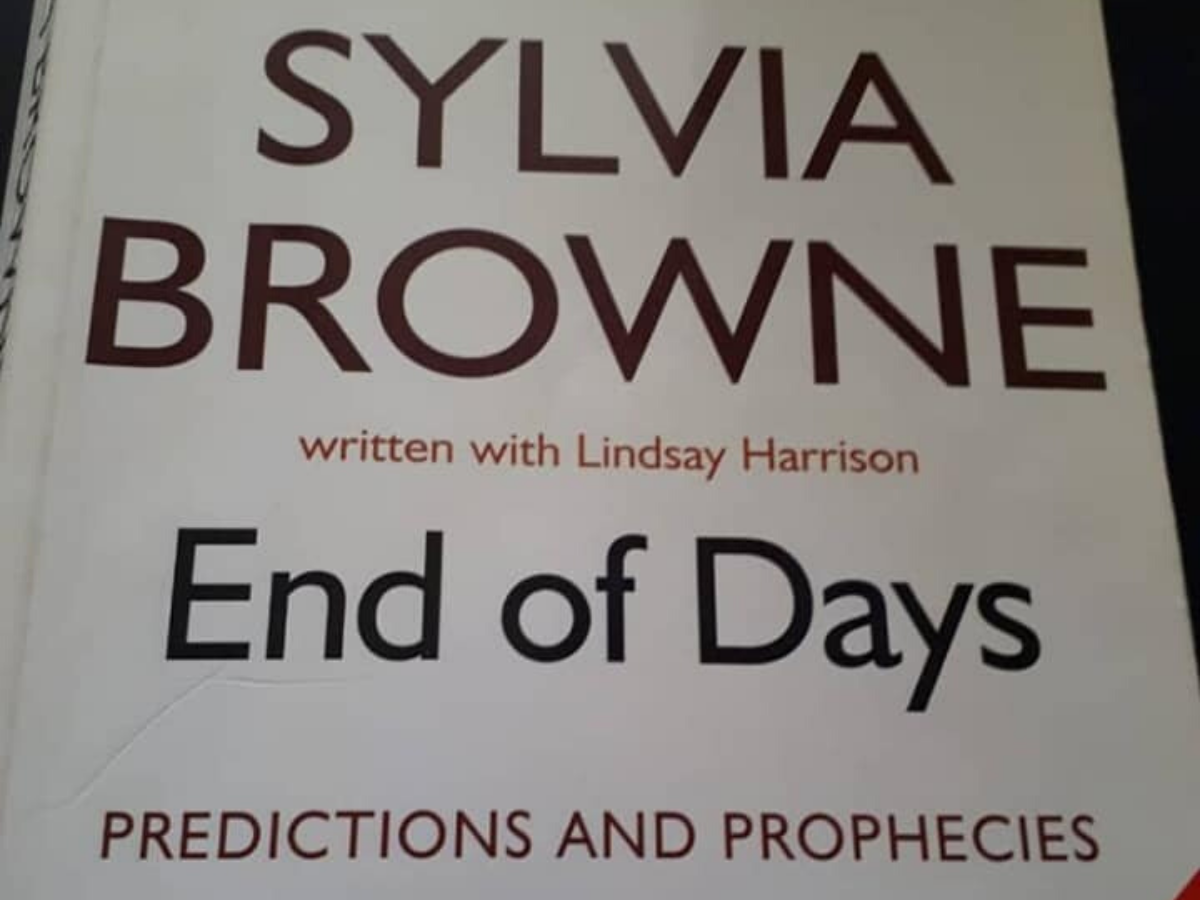 The images of the book are being widely circulated on social media platforms. The book reads, “In around 2020 a severe pneumonia-like illness will spread throughout the globe, attacking the lungs and the bronchial tubes and resisting all known treatments.” Creeped out yet? Wait there is more. It further reads, “Almost more baffling than the illness itself will be the fact that it will suddenly vanish as quickly as it has arrived, attack again 10 years later, and then disappear completely.” 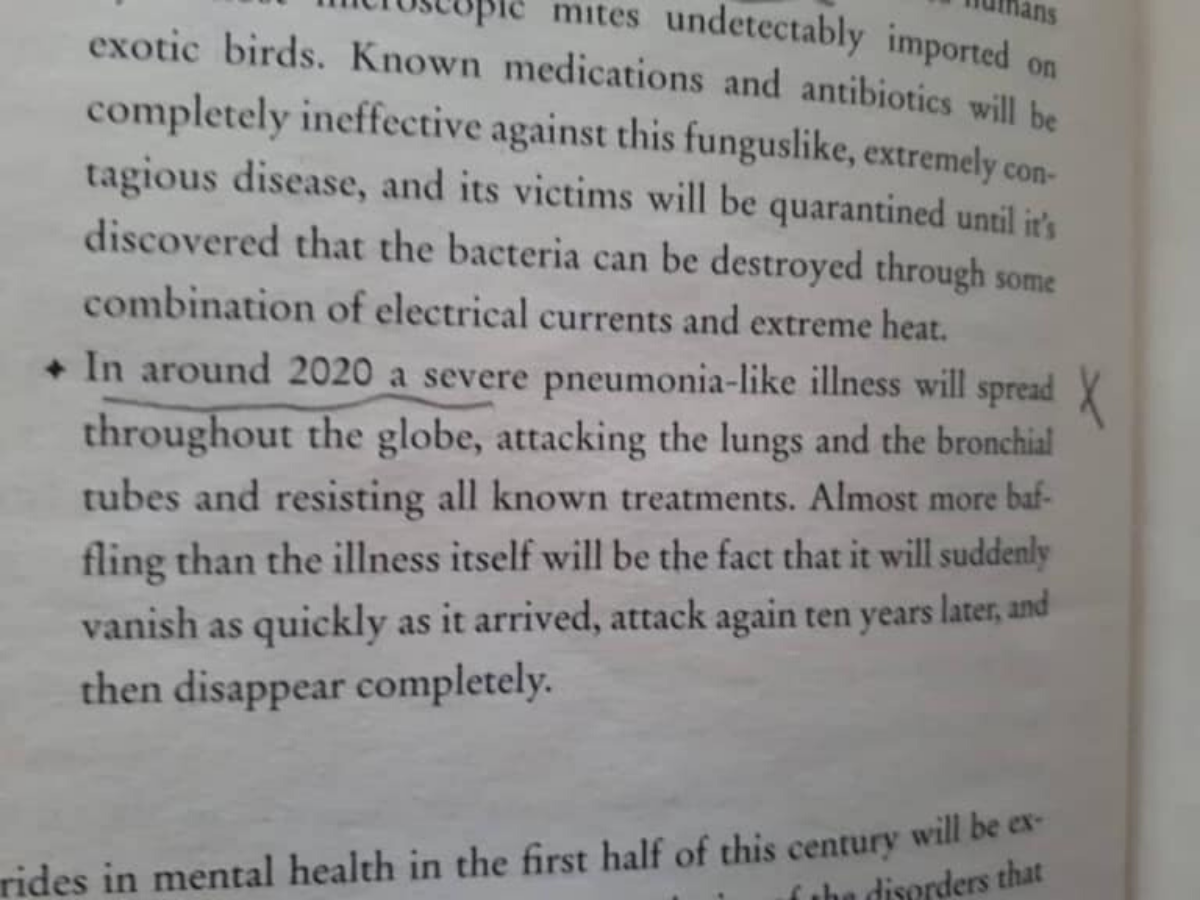 DISCLAIMER: While we report on the spread of coronavirus in India, we also need to emphasise that the need for caution shouldn’t lead to an atmosphere filled with anxiety and fear. We stand by #CautionYesPanicNo

Pompeo: Afghan violence must ease for peace deal to advance